If you want to become a real surfer, speak their language and understand them, then this article will help you with this.

How to speak surfing slang

Each sport has its own language, which is understandable only to the general circle of athletes. If you’re just getting into the surfing and you can’t always understand what those experienced salty dogs are talking about, you’re at the right place. We have compiled an extensive dictionary of terms and slangs most commonly used by surfers.

A-frame – A wave-shaped like a peak that breaks both left and right, equally. See the description of A-frame here.

Aggro – Aggressive attitude in the water; having a bad attitude.

Air / Aerial – An advanced surfing maneuver where the surfer and board leave the surface of the wave.

Ankle busters – waves that are too small to ride.

ASP – stands for Association of Professional Surfing. In 2014 the ASP changed their name to the World Surf League.

Backdoor – going inside a tube/barrel, also known as the curl of the wave, from behind its peak.

Backwash – Waves / water heading back out towards the incoming wave where it has rebounded from the beach / cliffs / sea wall etc.

Bail – To bail is to jump off the board to avoid an imminent wipeout.

Banks – Sand on the sea floor of a beach break. Beach break waves are dependent on the quality of the sand banks to provide good, surfable waves.

Barney – a surfer that is not cool, untalented, rookie.

Barrel – a tube, the curl of the wave, the hollow part of a wave when it is breaking, and one of the most sought after things in surfing.

Beach break – the places where the waves break over sandbars.

Beach Leech – refers to someone who doesn’t bring their board to surf, doesn’t rent and borrows other people’s.

Benny – a person who is not a local.

Blank – The foam used to shape a surfboard.

Blown Out – Where the onshore wind turns the surf in to unrideable mush.

Boardshorts / Boardies – These shorts are quick drying, lightweight, and worn by those lucky enough to be surfing in warm water.

Bombora / Bommie – An aboriginal term for a wave that breaks over a shallow reef, located beyond the normal lineup and often some distance from the shore.

Bottom turn – a turn that is made at the bottom of the wave; a very important maneuver that sets the tone for the ride. Watch the lesson here.

Carve / Carving – The classic surfing maneuver, carving is basically what turning on a wave is called. Carve is also an European surf magazine.

Caught inside – being caught between the shoreline and the breaking waves.

Charging – A surfer really going for it on a wave, surfing aggressively.

Chinese Wax Job – Getting wax on the bottom of your surfboard.

Chowder – Used to describe the pollution conditions when there’s a turd in the lineup.

Clean – Waves that break from a single peak along it’s length, providing an open face for a surfer to ride on.

Clean Up Set – A wave or set of waves that are larger than average and break before the line up, resulting in clearing the line-up of surfers.

Clidro – The process where a surfer turns up and down the face of the wave while surfing down the line.

Close Out – when a wave breaks suddenly and all at once. See more details here.

Clucked– being scared of waves.

Covered up – Where the lip of the wave breaks over a surfer, almost a barrel but not quite.

Cranking – When the waves are good, it’s said to be cranking.

Crease– damage to the surfboard by the impact.

Cross Step / Stepping – This is the art of walking up and down a longboard, foot over foot. When you see some guy / gal running up and down their board, you’ll now know what to call it. Watch the lesson.

Curl – the area of the wave where it is breaking. You can see this example in Wave Anatomy

Curtain – The outside part of the barrel.

Cutback– a surf move done sharply in the shoulder or the wave or on its flats to get back on the surf line.

Cutting off– the action of catching a wave in front of a surfer, who was going for it and was closer to it, stealing a wave—also known as snaking.

Deck – The is the bit of the surfboard you stand on.

Doggy Door – Exiting a barrel through the small hole left by the wave as it closes.

Double Overhead – The height of a wave twice as tall as the surfer.

Double up or humpback – when two waves combine; one large wave closely followed by a smaller one.

Drive – Drive relates to acceleration and maintenance of speed through turns.

Drop, The – The drop is where a surfer first gets up on the waves and drops down the face of the wave. It’s also referred to as “taking the drop.”

Drop In – Dropping in is a crime in the surf world. A drop-in is where a surfer catches a wave without having priority, i.e. there is already a surfer on the wave.

Drop Knee– Riding a longboard with one knee on the deck of the surfboard.

Drysuit – Protection when surfing in very cold water, when a wetsuit would not be effective for keeping warm.

Duck Diving – is diving under an oncoming wave when paddling out. See duck diving in full detail in surfing lesson three — duck diving.

Dumping – Often caused by onshore conditions, where a wave will fold over in big sections, making it un-surfable.

Eat It – Wiping out on a wave.

El Rollo – A surfing manoeuvre. Riding the inside wall of the pitched lip (barrel), instead of the main wave wall, and coming out sideways.

Face – The unbroken part of the wave.

Fakie – This is where someone rides backwards on the surfboard, tail first.

Firing – Firing is the same as “going off”, where the surf is really good and the waves are breaking nicely.

Fish – A type of surfboard shape, shorter and thicker than a standard shortboard. Fish surfboards are for surfing smaller waves.

Floater – Riding over the whitewater back onto the shoulder of the wave.

Foam – The broken part of a wave, another term for “Whitewater” or “Soup”. You can see this example in Wave Anatomy

Foamies – These are either whitewater waves or surfboards that are made out of foam.

Foil – The rate of change of thickness of a surfboard from the nose to the tail.

Froth – The foam left after a wave has broken.

Frube – A surfer who does not catch a wave for the whole time they are in the water.

Funboard – A mid-length surfboard, often know as a minimal.

Glass Job – The fibreglass finish on a surfboard.

Glassy – This is ultra-clean surf without a ripple that often looks like glass.

Going off – If the surf is really good, you could say it’s going off.

Green Room – Inside the tube or barrel.

Gremmie / Grommet / Grom – Any of the above can be used to describe a young or inexperienced surfer.

Grey Belly – An older surfer with the big belly.

Grom Mum – The mom who taxis her kids everywhere, anytime for a wave.

Grubbing – Falling off your board while surfing.

Hang Loose – the salutation that accompanies the sign of Shaka.

Hang Five – riding a surfboard with one foot placed on the nose of the board and five toes hanging over the nose.

Hang Ten – If you’re riding a longboard with both feet directly on the nose of the board, your hanging ten.

Header – to fall off a surfboard from the front, head first.

Heavy – can have a couple of meanings: Heavy, kick ass waves such as Teahupoo, Mavericks and Pipeline or same term can be used to describe the locals at a spot.

Helicopter– a surf move where the surfer spins their surfboard around from its nose.

Hit the lip – when a surfer turns up their surfboard to hit the falling lip of the wave, allowing the surfboard to be smashed down.

Hodad – a person who hangs around the beach and does not surf.

Impact Zone – The spot where the waves are breaking.

In the Soup – A term used when a surfer is in the white foam of the wave after the wave has broken.

Indo – Slang for Indonesia, home of some classic surf spots and a top surf trip destination.

Inside – The area of whitewater where the waves have broken, between the shore and the line-up. Also, inside can be used to describe the section of a wave that breaks towards the end of the ride, closest to the shore. 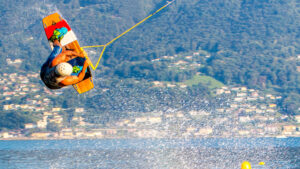 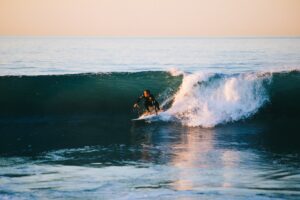 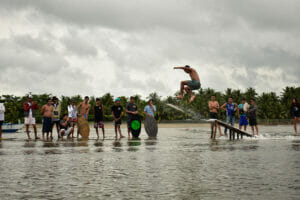 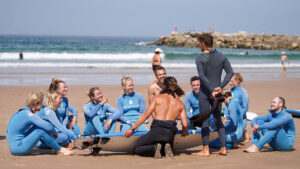 If you are thinking of learning how to surf or improve even more your surfing skills we found the perfect place for you. Best offer for All Extreme Community Members. 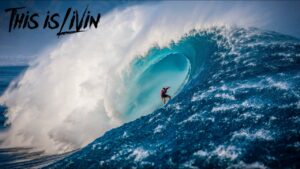